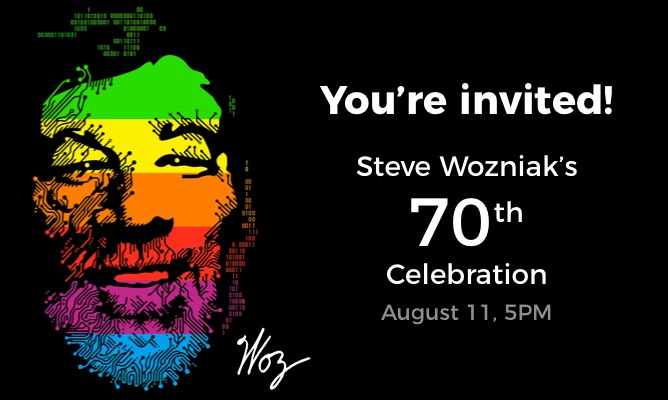 Please join us for an unforgettable night of music, stories, entertainment, and heart felt expressions of love, for an extraordinary man who has dedicated his life to making other people’s lives better. Woz would enjoy nothing more for his birthday than to continue to transform lives by supporting his favorite charity, the Inspiring Children Foundation. I hope you will join me in celebrating Woz’s life and transforming children’s lives! With gratitude, Janet.

Thank you so much for replying to my first email! I wanted to ask you if you have seen the movie Pirates of Silicone Valley. If so I am wondering what was the best part of the movie for you? And was there anything untrue in the movie that you would like too bring to my attention? Did Jobs really let people throw food at each other like what was shown in the bar scene of the movie were you quit Apple. Jobs was portrayed too have a rather strong personality and seemed to step on people. Well I’ve bothered you enough and, can’t wait to tell my family that I had the opportunity to speak with you. I am glad you didn’t know what your invention was going to turn into because then I would probably not be able to write you tonight….lol thanks for everything.

The personal drives portrayed in the movie were amazingly accurate. So were the key personalities, but not some others. The incidents themselves were all a best try to represent events that really occurred but they often happened much differently or at different times or with different people.

I never quit Apple. That suggestion was based on an incorrect Wall Street Journal that said I was leaving Apple because I didn’t like things there. Actually, I had told the Wall Street Journal writer that I wasn’t leaving Apple because of things that I didn’t like and that I wasn’t even leaving, keeping my small salary forever as a loyal employee. I just wanted a small startup experience and a chance to design a smaller product again, a universal remote control.

Did Steve Get Along with…

In the Pirates of Silicon Valley it appeared that Mike and Steve didnt get along too well…. What was their relationship in real life like??? Same question for Steve and John Sculley.

Mike and Steve got along very well, up until Steve was demoted and the board, including Mike, supported John Sculley. They conversed well and shared similar and constructive thoughts about ways to change the world and to do important things. Mike was the portrayed in the movie in a very inaccurate and unfair way, making it look like he was financially shrewd. Actually, he was intellectually open and contributing and, more than anyone else, he ran and structured the company in the early days, while Steve floated around getting his feet wet at running a company and learning to be a top executive. John Sculley was like Mike in the sense that Steve saw him open to great thoughts, although not as astute in our business. But John was largely Steve’s shadow in areas of where we should go with products. Eventually, John was more concerned with the total company operation and keeping things going while Steve wanted to keep advancing on the future, company and profits or not, in his own internally conceived directions. Actually, John Sculley promoted technologies like AppleTalk and PowerTalk and QuickTime and PlainTalk and the Newton. He was very supportive of the rare technical geniuses in the company. He was not just a “marketeer” who dressed things up in colors. Any downfalls in the company that weren’t coincidence were probably due more to his marketing mishaps (like not licensing the Macintosh technology in early days) than to hardware ones. This is only my opinion and is based largely on only a few indirect contacts.

Hello My name is Phil Grace, I am the tech cooridinator at Heber Springs public schools in Heber Springs, AR. For years our school has been a windows only school that’s how it was when I came here 2 yrs ago. I was also a windows only user for years as well until we had virus problems in our business labs that shut them down for about 2 weeks. During that time I was just fed up with windows so I started to look and investigate alternitive os options mainly Linux. I really enjoyed Linux it is a very good system but the desktop isn’t there yet. It’s not that user friendly and the mainstream software isn’t available. So I moved on in my quest and while doing some research I found out that there hasn’t been a virus created for OS X. This really intriged me and I wanted to find out more about Apple. So after seeing the machines that Apple is building, and getting a chance to try one it was love at first sight. I had seen the light of the tech world, this wasn’t just a temporary fix like anti-virus software, or windows patches, this was the solution. As soon as I got the chance I started moving in the Apple direction for our district. We do have a ways to go but so far about half of the library now has Mac Minis, one of our business labs that specializes in multimedia is all mac, the new server that serves our whole district is now an xserve, we have a mobile lab with iBooks, and I am typing this on an iMac G5 right now. The students are really getting into Macs and iLife, teachers are really enjoying it to. Woz thank you for the contribution that you made to the world of technology, the world needs a company and computer like Apple. Phil Grace Technology Cooridnator Heber Springs School District